← Click here to return to Blog Back to Blog 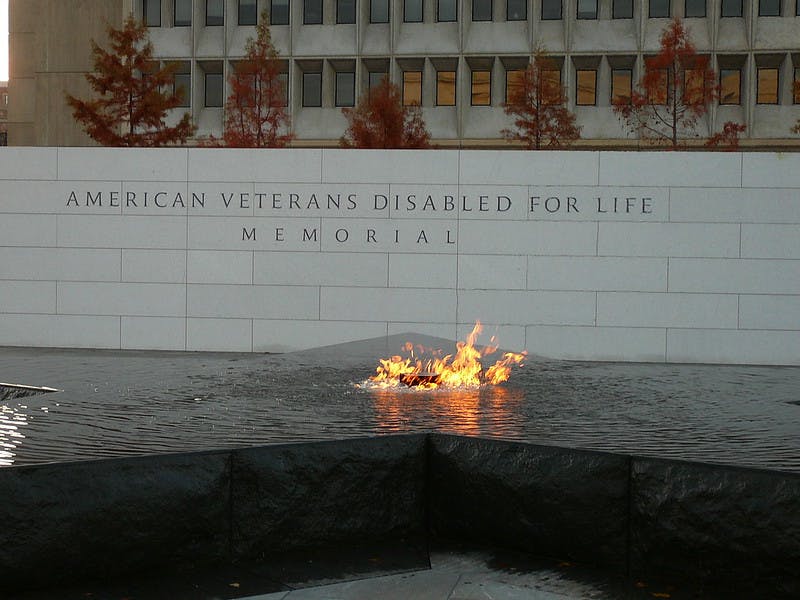 Millions of people travel to Washington, DC every year from near and far and they all want to see the same thing: the memorials, monuments, and museums along the national mall. But are they missing anything? As a local, I’ll tell you about some things that people miss out on, overlook, or just don’t know about.

Let’s start with The National Cathedral! There are a few things here that people can miss out on. They tend to not know about these things and if they do know about them, don’t get a chance to check them out or just have a hard time locating them. Now, the Cathedral sits on the highest point in Washington, DC so the view of the city from here is amazing! Make sure not to miss out on that opportunity. Still, that’s not exactly what I want you to check out.

Washington’s National Cathedral houses a tiny piece of the moon. It was delivered there personally by the men who brought it back down to Earth. On July 21, 1974, five years after their history-making lunar landing, Apollo 11 astronauts Neil Armstrong, Buzz Aldrin, and Michael Collins presented the seven-gram sample of moon rock to The National Cathedral. The moon rock is encased in an air-tight, nitrogen-filled capsule in one of the windows. The stained glass window that houses the piece of moon rock has become known as the “Space Window.” It truly is a beautiful piece of art. Whirling stars and orbiting planets are depicted in orange, red and white on a deep blue and green field. The Space Window is located on the south side of the cathedral. 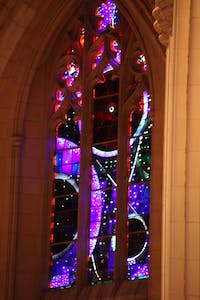 Since we are on the topic of space, atop the cathedral’s West Tower, there is a Darth Vader grotesque. In the 1980s the Cathedral held a design carving competition. Christopher Rader submitted the design and it was sculpted by Jay Hall Carpenter and carved by Patrick J. Plunkett. Christopher was actually the third-place winner. Other winning designs included a raccoon, a girl with pigtails and braces, and a man with large teeth and an umbrella. I would recommend using binoculars to view Darth Vader, but be very careful because the sun just might be shinning down on him. 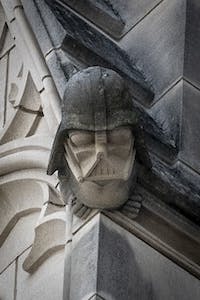 Now that we are done with the stars in the sky, there are other stars to tell you about. Let’s make our way down to the theater district. Hollywood has their walk of fame and Grambling Chinese Theatre, but DC has their own walk of fame and famous signatures in concrete. At the corner of E St. and 13th St. NW, is Warner Theatre, formally known as Earle Theater and later Warner’s Earle Theatre. To this day they have many stars of all walks come through their doors, and some of those well-known names are celebrated right on the sidewalk outside the theater. There are over 40 stars along the sidewalk around the theatre and not all the stars are actors and singers, but each has performed at the Warner. Some of the stars you can find there are Johnny Cash, Sweet Honey in the Rock, Washington Ballet: The Nutcracker, Tyler Perry, George Carlin, Bonnie Raitt, Robert Wagner, Whoopi Goldberg, Frank Sinatra, and Prince. Prince is so cool; his doesn’t even have a signature. 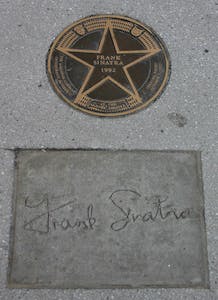 Wow! So many stars but, the next two things are star related and somewhat hidden in plain sight. Do the names Reese Witherspoon or Taraji P. Henson ring a bell? These two A-Listers are big TV stars on Big Little Lies and Empire, but they have some big name ancestors who founded some pretty big things. Both their ancestors have things in the DC area to carry on their memory. First let’s head over to DuPont Circle. 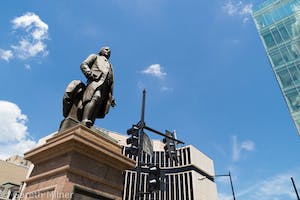 Located at Connecticut Avenue and N Street, N.W. is a bronze sculpture, by William Couper, of John Witherspoon. This Presbyterian minister is a Founding Father of the United States and actress Reese Witherspoon claims to be one of his descendants, but he’s known for much more than that. Yes, he signed the Declaration of Independence on July 4, 1776. He was also president of the College of New Jersey, which we now know as Princeton University. He was the only active clergyman and the only college president to sign the Declaration.

Just on the other side of the Potomac River in Virginia is Arlington Cemetery. That is where you can find the resting place of Matthew Henson, Taraji P. Henson’s ancestor. Over a period of 18 years, two U.S. citizens, Robert Edwin Peary and Matthew Alexander Henson, and four Inuit assistants, became the first human beings to set foot on the North Pole. On that historic day, April 6, 1909, it was Henson, an African-American, who first reached the Pole and planted the U.S. flag. Matthew Henson, however, received comparatively little recognition for his part in the discovery, even though Peary repeatedly acknowledged his great success within the expedition. Henson also was not considered for burial among the heroes at Arlington National Cemetery at the time of his death. Henson was buried in New York City’s Woodlawn Cemetery. In 1987, President Ronald Reagan granted permission for the bodies of Henson and his wife to be re-interred at Arlington National Cemetery. On April 6, 1988, the remains of Matthew Henson and his wife were re-interred near the grave site of Robert Peary and his wife Josephine Deibitsch Peary. 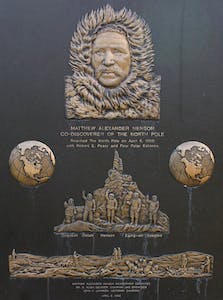 As you leave Arlington, you might take Theodore Roosevelt Bridge back to DC but just below the bridge is a small island, Theodore Roosevelt Memorial Island. In the 1930s, landscape architects transformed Mason’s Island into Theodore Roosevelt Island, a memorial to America’s 26th president. The small island in the Potomac River has a long history.  For more than a century, it was “Mason’s Island,” the home of John Mason, grandson of George Mason and was one of the finest farming estates in the region. The Masons departed about 1832, the Theodore Roosevelt Memorial Association bought it in 1931, and work came to a halt in the late 1930s and did not resume until after World War II. The memorial has four 21-foot-high granite tablets inscribed with quotations from Teddy Roosevelt’s writings surrounding a larger than life 17-foot-high bronze statue of Roosevelt with one armed raised in a “characteristic speaking pose.” 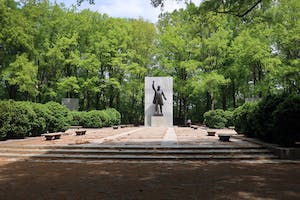 Another memorial not known to many is on the opposite end of the mall and it is The American Veterans Disabled for Life Memorial. The Memorial is located just west of the United States Capitol Building and the United States Botanic Gardens. Dedicated on October 5, 2014, the Memorial shines a light on war heroes who were disabled as a result of military service. It is the first national memorial dedicated solely to disabled veterans from all branches of service. It consist of glass panels, a reflecting pool and star fountain, ceremonial flame, granite walls, a tree grove, and bronze sculptures. The words of Presidents George Washington and Dwight D. Eisenhower can be found on the granite walls and a really nice touch to this memorial are the 69 ginkgo trees that will turn a beautiful shade of gold around Veteran’s Day each year. 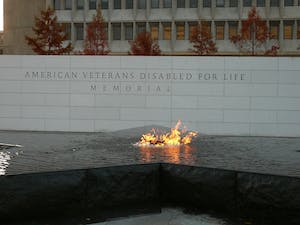 The next thing is not so much a memorial but is equally important. For this we will go back towards Pennsylvania Ave to Freedom Plaza, which sits diagonally across from The Warner Theatre. Here in Freedom Plaza is a time capsule that contains things related to Dr. Martin Luther King, Jr. In 1988, Western Plaza became Freedom Plaza in memory of Martin Luther King, Jr and the capsule is buried underneath it. It will be opened in 2088 and historians will find King’s bible, a robe he wore to preach in and audio recordings of some of his speeches. On a side note, President Barak Obama placed a signed copy of his inaugural speech inside a time capsule at the MLK Memorial. 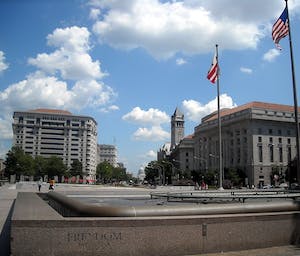 Well, we’ve explored tombstones, landmarks, gargoyles, statues, churches, and memorials, but there’s so much more. The National Mall is a wonderful part of Washington, DC and is enriched with so much history, beauty, meanings, and lessons, but for such a small town, DC has so much to offer “off the beaten path”. Here at Urban Adventures we can take you on custom tours to unexplored sites or you can learn from our guides on any tour, where to find our favorite hidden gems. So, with that said, I truly encourage you to explore the city in ways that most tourist don’t. Explore as if you were a local looking for something new to do in town because guess what, locals know!

Since the founding of the city beer has been an integral part of Washington, DC. Join one of our local…

Since the founding of the city beer has been an integral part of Washington, DC. Join one of our local guides to learn the part beer has played in history while sipping on pints in one of DC’s most international neighborhoods.

Since the founding of the city beer has been an integral part of Washington, DC. Join one of our local guides to learn the part beer has played in history while sipping on pints in one of DC’s most international neighborhoods.

Join our small group tours of the National Mall on board our all-electric Red Roadster — perfect for exploring DC's monuments!

Join our small group tours of the National Mall on board our all-electric Red Roadster — perfect for exploring DC's monuments!