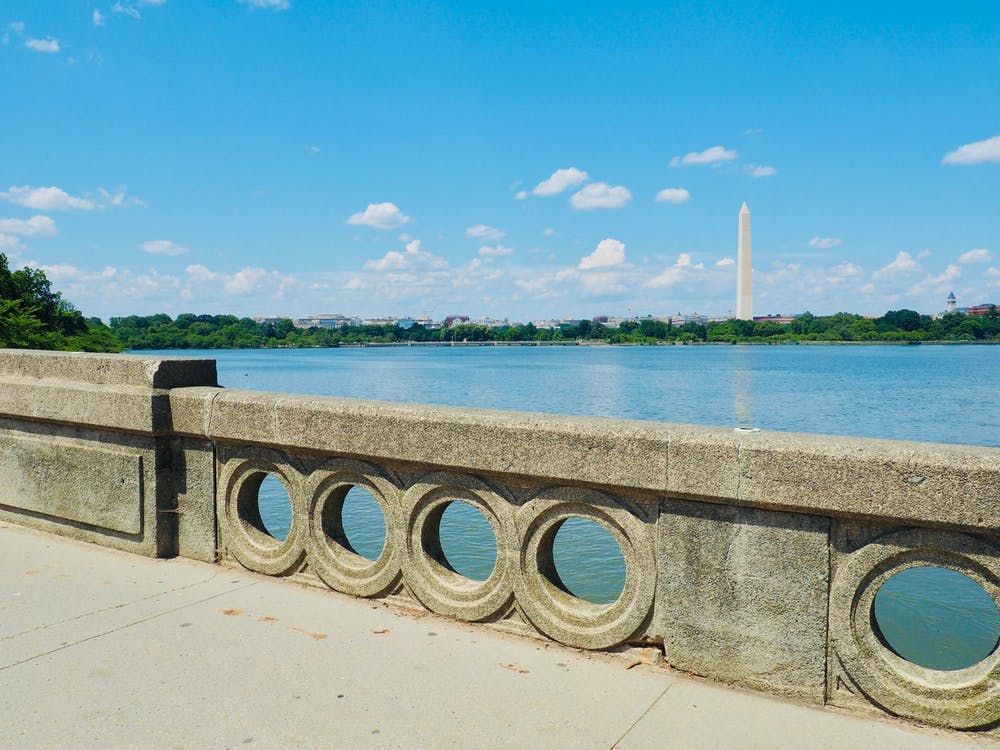 You know the phrase, “We’ll cross that bridge when we get to it.” Well, if you have a little time and want to explore some of the best overlooks in Washington DC, it’s time to get to that bridge! Discover the nation’s capital by foot, bike, or car to take in incredible river views, forest dells, and historic footpaths, all via the city’s best bridges.

The Dumbarton Bridge, sometimes known as the Buffalo Bridge, gracefully stretches between Kalorama and Georgetown over the Rock Creek Park valley. Originally, Q Street came to a dead end at Dumbarton House, meaning the mansion had to be relocated by 100 feet for the bridge construction. Designed by Glenn Brown in 1915, the Dumbarton Bridge exemplifies the City Beautiful movement, which became popular during the late 19th century and early 20th century in response to the 1893 World’s Columbian Exposition in Chicago. The movement was based on the utopian ideal that urban spaces were no longer solely symbols of industrialization, but could now be used to enhance the aesthetic environment of their residents. Essentially, the Dumbarton Bridge is as beautiful as it is functional. Moreover, City Beautiful glorified the nostalgia of the American frontier, which the bridge embodies through a row of busts of the Sioux Chief Kicking Bear, visible from the park below, and through the four bronze buffalo that stand sentry over its entrances above.

An added bonus: according to Georgetown Metropolitan, DC punk icon Jeff Nelson of Minor Threat is apparently an expert on the Dumbarton Bridge’s history. Who would have thought? 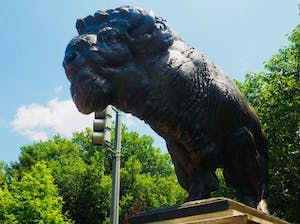 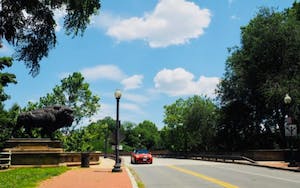 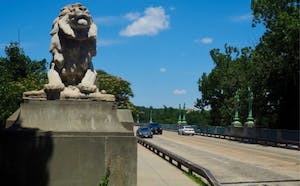 Not far from the Dumbarton Bridge is the William Howard Taft Bridge, completed in 1907, another wonderful example of City Beautiful architecture. Designed by engineer George S. Morison, the Taft Bridge was the largest monolithic concrete bridge of its time. Gaze out at stunning views of Rock Creek National Park from 136 feet up or pass under its seven soaring arches, the largest of which stretch 150 feet across. Plus, don’t miss the bridge’s wildlife–the entrances are guarded by four monumental lions and each lamppost is adorned with a stately eagle. 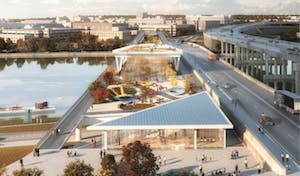 Across town in Southeast, a major new bridge project is underway on the Anacostia River. The 11th Street Bridge is getting a makeover that will include not just a roadway, but also a large elevated park and recreation facility. Architecture and design studios OMA of New York and OLIN of Philadelphia will be partnering to bring this social space to life in an area of Washington in which urban and community development has historically been neglected. 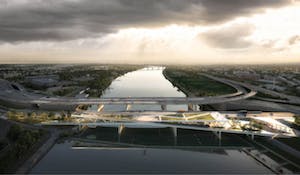 According to The Architect’s Newspaper, the 11th Street Bridge Park was described by the National Capital Planning Commission as “a place that will ‘increase community connectivity and create welcoming and vibrant spaces that enhance the user experience and foster civic and local uses.’…With an eye toward community equity, [the park] will serve as a pedestrian link between the Navy Yard and the historic Anacostia neighborhood in D.C.’s eight ward and…will be jam-packed with features including a hammock grove, public plaza, cafe, amphitheater, public art installations, community gardens, play spaces, and river access for additional recreational pursuits.”

By 2023, visitors and residents alike will be able to take full advantage of this incredible bridge park, the first of its kind in Washington DC! 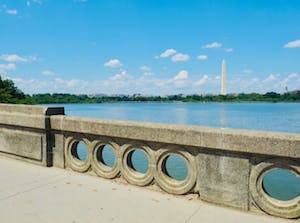 Scale down in size with a visit to the Tidal Basin Inlet Bridge, which separates the Basin from the Potomac River. The Tidal Basin was not always there; it’s a constructed 107 acre body of water that’s about 10 feet deep, put in place to help control the river’s 250 million gallons-worth of daily tidal flooding. Built originally in the 1880s and called Twining Lake, the Basin was renovated in the 1940s by the engineering firm Alexander and Repass. Significantly, Alexander, an African American man, and Repass hired both Black and white workers for their projects at a time in history when this was incredibly rare. 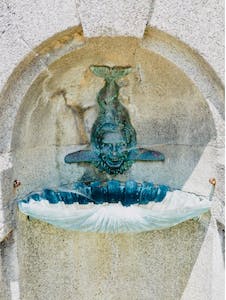 If you’re looking for your perfect picture postcard view, the Inlet Bridge won’t let you down. The vista includes the Washington Monument, the Jefferson Memorial, folks out in paddle boats, and DC’s famed cherry blossom trees, which bloom in March and April. Across the Potomac, you can see the Pentagon, the National Air Force Memorial, and a glimpse of Arlington National Cemetery.

Don’t forget to take a closer look at the bridge itself, which includes several quirky grotesques (a type of gargoyle that doesn’t include a rainspout) in the shape of a man’s face with a whale tail. The face is that of Manus “Jack” Fish, former head of the National Park Service’s National Capital Region. The artist behind the grotesques was Constantine Seferlis, a stone carver who had experience at the Washington National Cathedral, the National Shrine of the Immaculate Conception, the Smithsonian Castle, and Westminster Abbey in London. Seferlis was known for his sly sense of humor and his rendering of Jack Fish is no different! 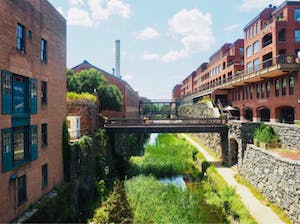 Over in Georgetown, stroll down just below M Street to find old sections of the Chesapeake & Ohio Canal and the bridges that criss cross it. Because Georgetown was a trading hub long before the city of Washington was ever conceived, it was an obvious choice for a canal destination. Built between 1829 and 1850, the canal stretched from all the way out to Cumberland, Maryland, opening the west to the growing population and markets in the new nation’s capital. It rises and falls over an elevation change of 605 feet and includes 74 locks, 11 aqueducts to cross major streams, and more than 240 culverts (bridge portals) to cross smaller streams. Georgetown’s canal bridges are some of the most romantic spots in the city and are a great place to catch sunsets over the Potomac. 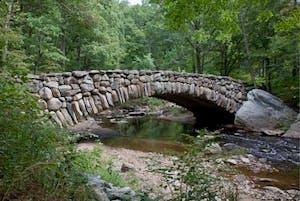 Boulder Bridge in Rock Creek Park perhaps wins the award for most quaint bridge in DC. You’ll find it on Beach Drive just north of Blagden Avenue, elegantly crossing the creek like something from a fairy tale. Built in 1902 by architect W. J. Douglas, its rustic design exemplifies the Park Service’s Romantic aesthetic of the time. The bridge was added to the National Register of Historic Places in 1980.

Just outside of Rock Creek and up the hill from Boulder Bridge you’ll find Hillwood Estate, Museum, and Gardens, one of DC’s best hidden gem museums. The estate was owned by Post cereal empire heiress Marjorie Merriweather Post from 1955 until her death in 1973. Over the course of her life, Post became a connoisseur of French and Russian decorative arts and much of her world-class collection is on view in the mansion. 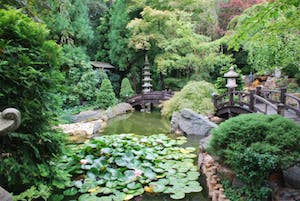 Hillwood is also known for its acres of gardens, which include a rose garden, greenhouses, a putting green, a French Parterre, and a Japanese-style garden. The Japanese-style garden, designed by Shogo Myaida, spills down a steep hillside and incorporates sculptures of symbolic animals, pagodas, and two lovely bridges. One is situated halfway down the hill and is made of carved stepping stones placed in the middle of a waterfall. The other bridge arches across the bottom, providing the perfect place to view the entire garden and offering a space for rest and contemplation within the crafted landscape.

Back over on the Anacostia River is another spot even many locals don’t know about. Kingman Island is accessible from a small gate off the sidewalk on the Ethel Kennedy Bridge (Benning Road) and transports you into a natural oasis. The island, along with Heritage Island, was built from the runoff material that had been accumulating in the river since the late 18th century due to deforestation and agriculture. The silting of the river both blocked commercial trade opportunities and caused major health concerns, what with the mosquito breeding grounds that might have caused yellow fever or malaria epidemics, and with the sewage that was dumped directly into the water. 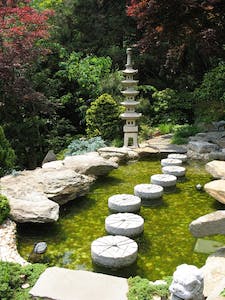 Completed in 1916, Kingman Island was owned by the National Park Service until 1955 when control passed to the Washington DC government. Today, many organizations are working toward the revitalization of the Anacostia River and Kingman Island is managed by an outdoor education group called Living Classrooms, which oversees a teaching garden, nature trails, and wayside exhibitions. Wander through the woods and don’t miss some cool graffiti underneath the Whitney Young Memorial Bridge!