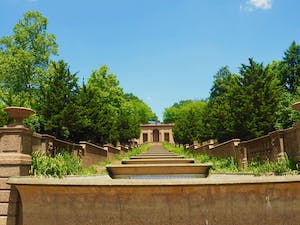 There’s no doubt that northwest Washington DC is known for its architecture. Gorgeous Victorian row homes tower over tree-lined streets in Dupont Circle, Neoclassical monuments grace the National Mall, and the Gothic Revival Washington National Cathedral perches high on its hill above it all. Some structural features we may take for granted, however. Northwest’s staircases may take us from Point A to Point B in the hillier areas, but many of them are architectural gems themselves, worth noting as you wander the city. 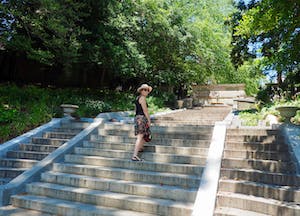 Tucked away in Kalorama Heights near the Woodrow Wilson House, the Spanish Steps create a tranquil mini-park surrounded by magnolias, eastern red cedars, and flowering trees. The steps are formally named Decatur Terrace Steps and Fountain but are nicknamed for the famed Spanish Steps in Rome. 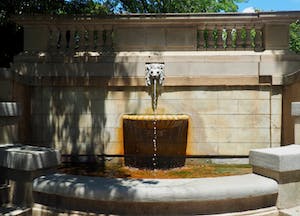 Designed by Robert E. Cook for the Municipal Office of Public Works in 1911, the steps were built in the heart of the City Beautiful movement, which flourished during the late 19th century and early 20th century. City Beautiful, which emerged in response to the 1893 World’s Columbian Exposition in Chicago, was based on the utopian ideal that urban spaces were no longer solely symbols of industrialization, but could now be used to enhance the aesthetic environment of their residents. As a microcosm of this outlook, DC’s Spanish Steps create a space of peace within one of the city’s loveliest neighborhoods. 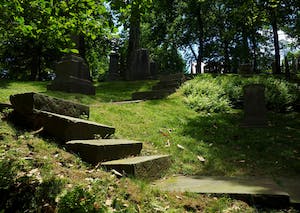 Across Rock Creek Park you’ll find the terraced Oak Hill Cemetery, one of the oldest park-like cemeteries in the country. Oak Hill was founded by William W. Corcoran, whose bank is known today as PNC Bank. Corcoran purchased 15 acres along Rock Creek Park in 1848 and contributed the land to the Cemetery Company, which was incorporated by an Act of Congress a year later. James Renwick, Jr., architect of the Smithsonian Castle, the Corcoran Gallery (today the Smithsonian’s Renwick Gallery), and St. Patrick’s Cathedral in New York City, designed the lovely Gothic Revival Oak Hill chapel in 1849. 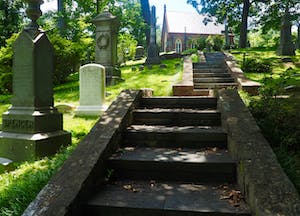 The cemetery meanders over green slopes in the English garden style that knowingly and carefully contrives a whimsical and natural-looking environment. Wander up and down both formal and crumbling stairways to find early Washington’s rich and famous among the mausoleums and follies. 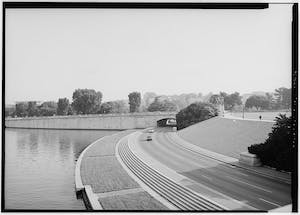 Watergate Steps/Photo via Library of Congress

You may be surprised to learn that the Watergate Steps have nothing whatsoever to do with the Watergate scandal. In fact, the Watergate Complex in Foggy Bottom was built over 30 years after the Steps. Constructed in 1932 as a part of the Arlington Memorial Bridge project, the steps are located just behind and below the Lincoln Memorial on the banks of the Potomac River. While they were envisioned as a ceremonial entrance to the nation’s capital for dignitaries arriving by boat, they were never used for that purpose. 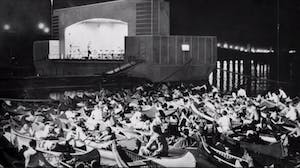 Canoes at the Sunset Symphony/Photo via Washington Evening Star

From 1935 to 1965, the Watergate Steps were home to the National Symphony Orchestra’s Sunset Symphony series, which was performed on a 75 foot barge floating in the river just in front of the steps. Up to 15,000 people gathered to listen, with some paying between 25 cents and $1 to sit right on the steps and others lining the grass, water, and bridge for free. President Franklin D. Roosevelt occasionally made an appearance, listening from the Presidential Car. By the mid-1960s, however, air travel out of National Airport across the Potomac was on the rise, and the Sunset Symphony concerts came to an end because the jets flying overhead drowned out the music. Today, the Watergate Steps offer stunning views across the river and are a great place for a stadium-style workout. Access the Steps by foot or bike right on Ohio Drive. 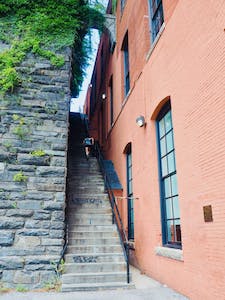 Perhaps the most famous set of steps in Washington are the Exorcist Stairs between M Street and Prospect Street in Georgetown. The 97 steps are as steep as can be and sandwiched between the old Capitol Traction Station and a high retaining wall, making the perfect creepy setting for the brutal death of Father Damien Karras in the 1973 horror classic, The Exorcist.

In 2019, the Historical Preservation Review Board granted the 1895 Stairs historical landmark status and nominated them to the National Register of Historic Places. This status also included the Traction Station, also known as the Car Barn, a three story transit center for four streetcar companies. The building includes a clocktower and large arched windows, making it an excellent example of Romanesque Revival architecture. Visit the District’s most macabre site at dusk if you dare, or head there for a challenging daytime workout.

Situated between Columbia Heights and Adams Morgan, Meridian Hill is one of the most picturesque parks in DC. When the city was founded in 1790, the land was owned by Robert Peter (father of Thomas Peter of Tudor Place) and known as Peter’s Hill. In 1804, President Thomas Jefferson had a geographic marker placed on the hill, which centered exactly north of the White House and helped establish a longitudinal meridian for the city. Commodore David Porter, a War of 1812 naval hero, purchased a 110-acre tract of land that included the hill in 1816, and gave it its current name. 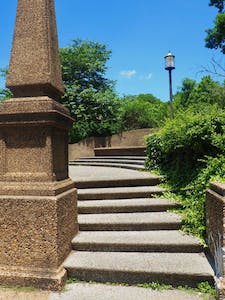 The area changed hands several more times over the next century, until an Act of Congress established Meridian Hill Park as a public space in 1910. Landscape architect George Burnap, and later Horace Peaslee, designed the park after those in European capitals, incorporating an Italian Renaissance-style terraced fountain in the lower half and French Baroque-style gardens in the upper half. The gardens were later reconfigured into a grassy mall suitable for gatherings and performances. In 1969, civil rights activist Angela Davis proposed renaming the park after Malcolm X and although the change was never made official, many DC residents refer to the park as such. Meridian Hill Park is now a part of the National Park Service’s National Capital Parks Unit and is a great spot for picnics, concerts, and the ever popular Sunday afternoon drum circle. Lounge on the mall or find a secluded nook in the lower section among the grand stairways and hidden steps.

With so many hidden gems in one of the world’s most famous cities, it can be hard to know where to start! Take yourself on a tour of DC’s staircases or book a custom neighborhood tour with an Urban Adventures local guide for more unexpected Washington wonders.